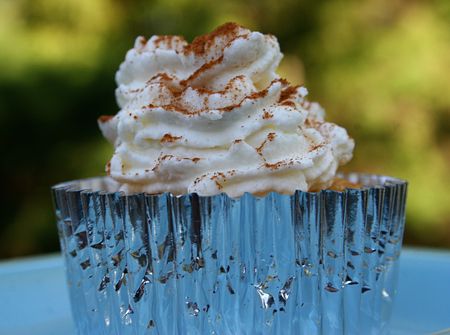 Since it's Cinco de Mayo I decided to plan a Mexican dinner - Enchiladas for the adults & taco bar for the kids, along with some Mexican Rice & Refried Beans, of course!

And for dessert Tres Leches Cupcakes (Three Milk Cupcakes). Yum! After much searching and reading recipes, I came up with these two from here & here and then did the following:

Mix 3/4 cup sugar with 5 egg yolks until doubled in volume. Then add milk, vanilla, flour, baking powder, salt & butter - I beat at med speed fairly quickly just to combine. In another bowl beat the 5 egg whites with remaining 1/4 cup of sugar until soft peaks formed and then folded into batter.

Pour into cupcake foils about halfway - you don't want them to bake over the cups. Bake at 325F for 22-25 minutes. This recipe made 24 cupcakes. 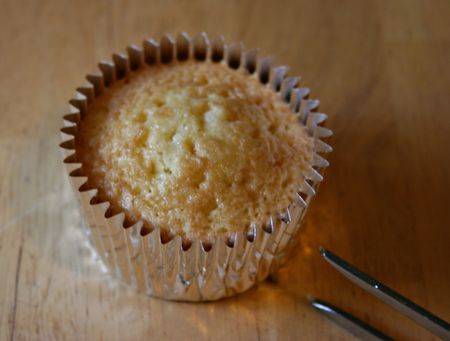 After cupcakes have cooled, pierce holes in top of cupcakes. I used a BBQ fork stopping just before it went through foil.

While original recipes only call for above, I added:

Brush over cupcakes. By the time I got to the last cupcake the first ones had soaked up the mixture and I was able to keep going. Made 3 sweeps before it seemed it like it might not absorb any more.

Then I made the topping - whipped cream: Topped the cupcakes and "sprinkled" on some cinnamon. So good!

Oh and it can't be just any vanilla or cinnamon, it has to be: Fiesta or Siesta - hope you find a way to celebrate Cinco de Mayo! ;)

Posted at 06:00 AM in Cupcakes, Holiday, In the Kitchen | Permalink

Those look delicious! You have inspired me to make Mexican for dinner. I think we will have quesadillas tonight!

YUM! those look and sound amazing!
we are making steak quesadillas tonight! (and there may even be some tequila involved :)

Yum!! I definitely want to make these :)

Just wanted to let you know that I made these today, and they are THE BEST! Thank you so much. I put a photo of them on my blog & linked it back to your blog for the recipe!