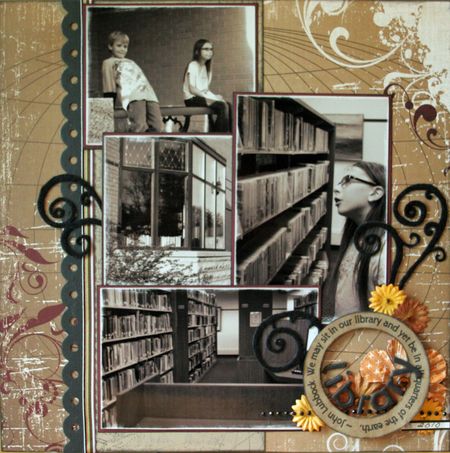 Trying to catch up on some classes, for this one I'm counting it as something from 2 of them: Dimensional Details & Texuality - putting title in a circle. I lifted the layout from Details "Learn It" section focusing on Titles, which also included something we learned from focusing on Photos - to sand the edges. A little scary and I got some scratches where I didn't really want them but letting it go. :)

Didn't have any paper that matched the Heidi Swapp "World Traveler" background paper so created my own with some cardstock & an "Old World Map" background stamp - and then pretty much covered it up, lol.

Hope you had a nice weekend!

Our Brownie is now a Junior Girl Scout but we decided to go see Shrek at the Drive-In with Iron Man 2 next weekend instead - hopefully the weather will be nicer by then too.

Off to work on a layout from Week 5, catching up!

Oh, I love this! Looks like you mastered the layering - the title corner looks awesome! Love the sanded edges!

Beautiful job! Love the layering and the sepia photos.

Love your pictures in this Lo. Great work. Mika (www.mikascrap.typepad.com)