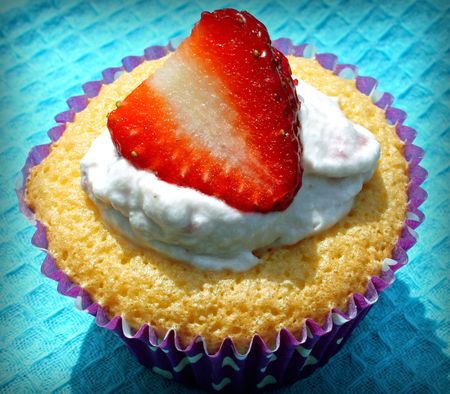 While it's not as fancy as the cute cupcakes I posted yesterday and also not the ones I had first envisioned creating - this was the end result.

I started with a sponge cake recipe from here:

I found this recipe to make about 36 cupcakes.

I used my new cupcake pan to have holes for filling: 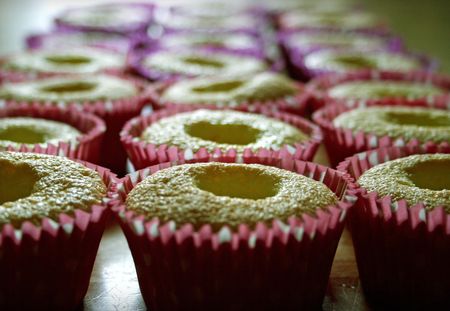 The pan worked great! I sprayed the silicon "plugs" really well with Pam (vegetable oil spray) and waited 15 minutes to let it cool down before attempting removing.

Then made some Strawberry Whipped Cream:

I found and increased the recipe from here.

I then used the decorator tool to fill the cupcakes: 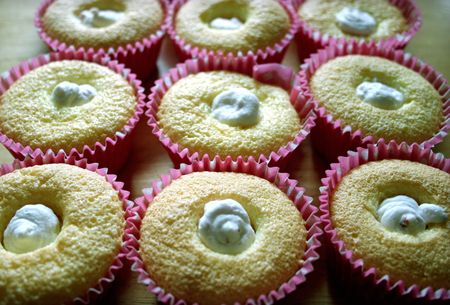 It worked really well. The only issues I had were operator ones. A few John Belushi/Animal House moments when my strawberries got clogged in the decorator tip - mash them WELL! :)

And then I tried something, which failed & will be for another post - I have not given up! So as a back up I topped the remaining cupcakes with the little bit of whipped cream I had left and added a slice of strawberry on top. No one around knew any better.

Have a great weekend! Any fun plans?

Posted at 06:00 AM in Cupcakes, In the Kitchen | Permalink

Yum! Those look awesome! We have so many strawberries now, I should make these.

Mmmmmm looks and sounds delish! A perfect snack for this beautiful day!

Think I am gonna make these tommorow! Mika (www.mikascrap.typepad.com)

You're making me HUNGRY for cupcakes! Looks delish!

Just had to leave another comment to say how much I love your new banner. Perfect for spring and such a beautiful photo!